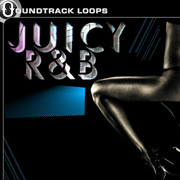 Soundtrack Loops has announced the release of Juicy RnB, a royalty free set of loops and samples in multiple formats.

Juicy RnB is available to purchase for $19 USD.