Source Audio has announced the release of the Android version of its Neuro Mobile App, a free app that unlocks the full potential of Source Audio One Series pedals, giving musicians access to a vast library of additional effect engines, a detailed effects editing interface, as well as preset saving and sharing capabilities. 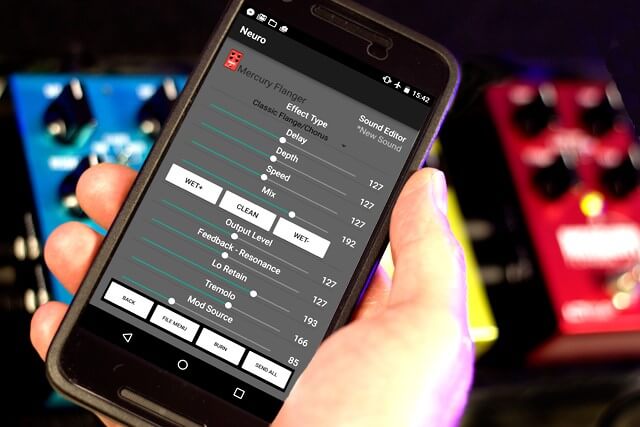 “Many companies in our industry make the assumption that Apple products are all that matter,” says Source Audio president, Roger Smith. “The reality is that a significant number of musicians – particularly outside the US – use Android devices. With the release of the Neuro App for Android, the power to easily tweak, create, and share effects is in the hands of over a billion new users.”

Source Audio’s One Series line of effects pedals currently includes the Vertigo Tremolo, Gemini Chorus, Lunar Phaser, Mercury Flanger, and Nemesis Delay. Out of the box, each pedal works like a classic plug-and-play stompbox, but connecting them to the Neuro Mobile App unlocks a powerful collection of additional controls and features. The App connects with a standard audio cable (included with every One Series pedal) directly from the device’s headphone jack to Input 2 of the pedal.

Once an effect has been selected from the Neuro library of effects, it can be burned (with or without additional edits) directly to any of the toggle switch or effect selector positions on the pedal. It can also be saved as a pedal preset. In addition, users can create a personal Neuro profile where presets can be saved for personal use or published directly to the App and the Source Audio website and made available to the entire Neuro community.

“There is a group of Nemesis owners currently using the deep editing ability of the Neuro App to recreate the exact tones of some very rare and expensive vintage delay boxes,” says Smith. “They make their tweaks and with a simple button push are able to instantly share their work with the rest of the Neuro community. This is extremely exciting to me. Our users are not only gaining access to Source Audio’s library of sounds, they are rapidly expanding the global library of delay, distortion and modulation effects.”

The Neuro Mobile App is a free download at the Google Play Store for Android and the App Store for iOS.