Source Audio has announced the release of the Vertigo Tremolo, a powerful tremolo pedal with three onboard tremolo effects, stereo inputs and outputs, tap tempo (with Source Audio’s external tap tempo switch), and MIDI functionality when coupled with the Neuro Hub (formerly the Soundblox Hub). The Vertigo is the first pedal in Source Audio’s new One Series line of effects. 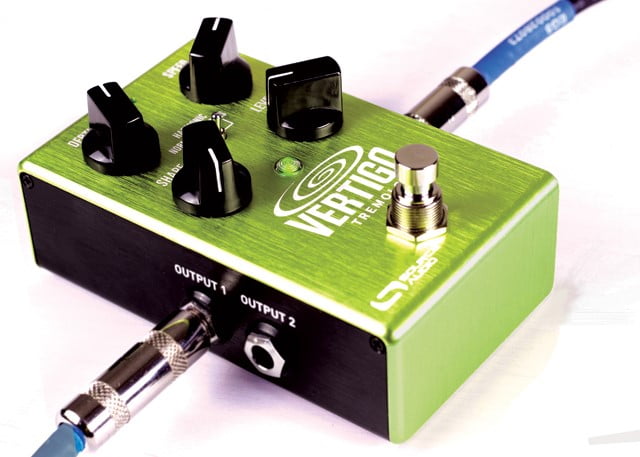 The One Series is a collection of streamlined, plug-and-play ready pedals with enhanced editing and preset saving capabilities when connected to Source Audio’s Neuro Mobile App (a free download for iOS and (coming soon) Android). “During our company’s ten year existence, we’ve come to understand how musicians interact with their effects,” says Source Audio President, Roger Smith. “There’s really a very wide spectrum – at one end there are the players who like to simply grab a pedal, plug it in and have it sound great. On the other end there are those who want to dig deep and intensely sculpt their sound. With the Vertigo Tremolo and the rest of the pedals in the One Series line, we truly believe that we’ve created a group of effects that will excite and inspire both sides of the spectrum and everybody in-between.”

Out of the box, the Vertigo Tremolo offers tremendous tonal range, but when connected to the Neuro Mobile App, the Vertigo gains additional functionality and effect possibilities. The Neuro App provides access to Source Audio’s free library of progressive tremolo patterns and hybrid modulation effects – each additional effect can be tweaked and stored in the user’s personal library of presets, shared with other Vertigo owners, or burned directly to the pedal. The App also offers an extended set of adjustable parameters including parametric EQ, wet/dry mix, tap tempo, low cut, and stereo separation.

When coupled with the Neuro Hub, the Vertigo is fully MIDI compatible, giving the pedal the power to save up to 128 presets easily recalled via MIDI program change (PC) messages.

“With the Vertigo and the other One Series effects pedals, we focused on making simple, great sounding, and easy to use stompboxes with added features that can keep even the most maniacal of tweakers engaged,” says Source Audio CTO, Jesse Remignanti. “The Neuro App interface opens up a world of possibilities for crafting and sharing custom tones. There’s really something for everyone!”

Happy Holideals Sale: Save up to 50% on IK Multimedia’s music...