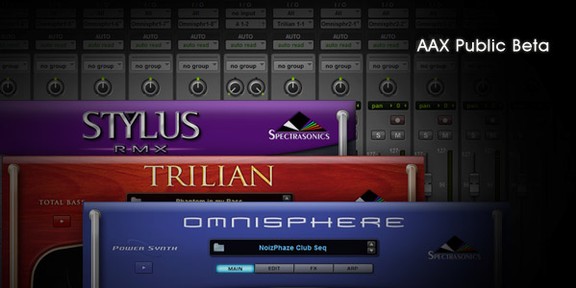 “Pro Tools 11 is a major new version of the industry standard DAW – essentially a ground-up new 64-bit architecture application. Spectrasonics is fully commited to the Pro Tools platform and we want to support our cutting-edge users who have already begun upgrading to it.” says Eric Persing, Founder and Creative Director of Spectrasonics. “This public beta of our 64-bit instruments offers AAX support to take advantage of all the new power in Pro Tools version 11. It’s exciting for us to be at the forefront of the new 64-bit Pro Tools environment.”

The Award-winning Omnisphere Power Synth is Spectrasonics’ flagship instrument featuring a hybrid architecture of high-resolution streaming samples as well as an extensive, fully programmable semi-modular synthesizer, which can be combined for thick, layered patches. Omnisphere ships with over 8,000 sounds. The Trilian Total Bass Module instrument is built on the same STEAM Engine technology as Omnisphere with immense flexibility in programming, while offering a vast selection of patches for Acoustic, Electric and Synth Basses. Stylus RMX, the Realtime Groove Module, is Spectrasonics loop-based plug-in for creating rhythm parts powered with the Spectrasonics Advanced Groove Engine (S.A.G.E.™) and featuring REX file compatibility for importing loops for unlimited library expansion.

Registered users of Spectrasonics 64-bit Omnisphere, Trilian and Stylus RMX and Pro Tools version 11 can log into their user accounts to download the AAX Public Beta software in the Updates area.