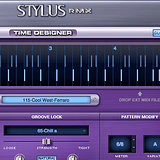 Spectrasonics has released version 1.7 of Stylus RMX, a groove-based virtual instrument plug-in for Windows and Mac.

Spectrasonics has released Stylus RMX® version 1.7 featuring an innovative and completely new capability called ‘Time Designer™’ which intelligently transforms RMX audio loops into different time signatures and features the ability to “Groove Lock” the feel of any groove to another – all in real time. Time Designer also lets the user create instant pattern variations with smart algorithms based on musical rules, and to ‘simplify’ any RMX groove in a musical manner. Version 1.7 is also the first 64-bit native software release from Spectrasonics, includes all the new effects from Omnisphere and useful workflow enhancements to RMX, such as Suite Editing and Host Transport Sync.

Stylus RMX v1.7 with Time Designer is available now, free to all registered RMX users as a download from the Spectrasonics website.