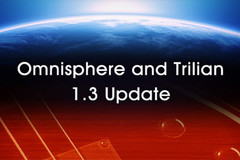 With the release of version 1.3 Spectrasonics has also launched a VIP Patch Library.

The VIP Library is a brand new library of amazing new patches and multis – which are an exclusive special bonus for our customers that own both Omnisphere and Trilian.

The VIP sounds were created by the renown Spectrasonics Sound Development Team utilizing the vast possibilities of these two instruments together to take Omnisphere to a whole new sonic level!