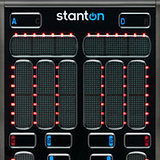 The SCS.3m can be used as a standalone controller for basic software mixing, but when paired with the SCS.3d deck controllers, give you an unparalleled MIDI control rig that allows you to plug and play anywhere in the world within minutes. With a built-in powered USB hub and magnetic connecting system, the SCS.3m can be easily connected to one or more SCS.3d controllers for a high tech version of a full traditional DJ setup… without the weight, size and connectivity issues.