Steinberg has announced the availability of the UR22mkII Recording Pack for early November. 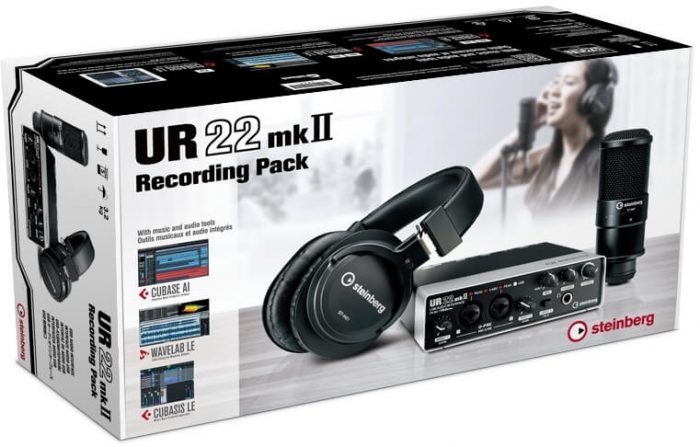 The UR22mkII Recording Pack comes with the UR22mkII mobile USB audio interface alongside the ST-M01 studio microphone, the ST-H01 studio headphones and an XLR cable. To round out this offer, the latest software versions of Cubase AI and WaveLab LE plus Cubasis LE are also included, allowing for easy music production and audio editing on computer and iPad.

The UR22mkII houses two TRS/XLR combo inputs, two TRS outputs, MIDI I/O plus one separate headphone output. The two D-PRE mic preamps provide phantom power for condenser microphones. Other highlights are latency-free hardware monitoring, a sampling rate of up to 192 kHz, as well as seamless connectivity to Windows and Mac computers and the iPad.

Steinberg’s Product Marketing Manager, Stefan Schreiber, commented: “We have been providing hardware bundle offers for some time now but this one surpasses them all. Software programs for computer and iPad alike, headphones, mic and the audio interface turn together the UR22mkII Recording Pack into a very impressive recording bundle. It includes really everything you need to get started right away… bar the computer.”

The UR22mkII Recording Pack will be available from early November, at a suggested retail price of 279 EUR, including German VAT.