Steinberg has announced the release of the Steinberg Production Starter Kit, a hardware/software bundle which includes all the essentials for recording and making music productions from A-Z.

The Steinberg Production Starter Kit features the UR22C USB 3.0 audio interface, Nektar’s Impact LX25+ keyboard, the ST-H01 studio headphones and the ST-M01 studio condenser microphone. On the software side, Steinberg’s acclaimed Cubase Artist 10.5 is the centerpiece of music productions, with HALion Sonic 3, WaveLab LE and Cubasis LE, the sequencer app for the iPad and iPhone, rounding out this bundle and making it one of a kind. 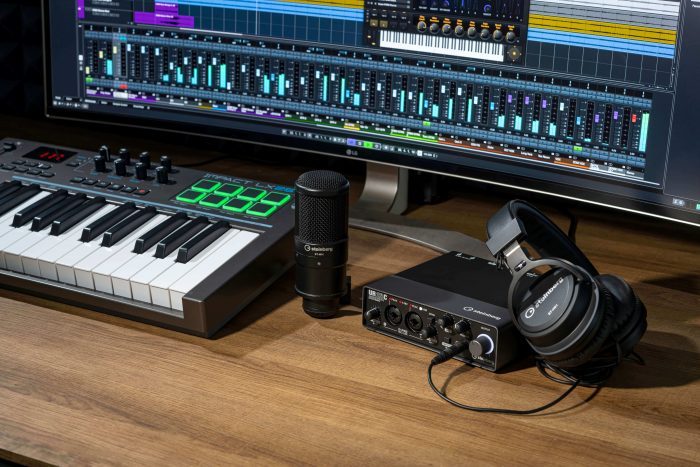 The UR22C is a two-channel audio interface with USB-C connectivity, housing two TRS/XLR combo inputs that include studio-grade D-PRE microphone preamps, two TRS outputs, MIDI I/O and one headphones output. Other highlights are latency-free hardware monitoring, superb audio quality with a sampling rate of up to 192 kHz, as well as seamless connectivity to Windows and Mac computers and the iPad and iPhone.

Cubase Artist 10.5 is based on the same technologies offered within Steinberg’s award-winning advanced music production system, Cubase Pro. The Artist edition combines audio and MIDI recording and production, with many creative tools and instruments. To complement the array of sounds and instruments already included in Cubase, HALion Sonic 3 also provides over 3,200 instrument sounds together with many effects for further audio processing.

Also included in the Steinberg Production Starter Kit are WaveLab LE 10 and Cubasis LE. WaveLab LE has the essential tools to edit any recording while Cubasis LE is a multi-touch sequencer app for recording, editing and mixing on the iPad and iPhone.
The included ST-M01 studio condenser microphone boast a wide frequency response range for recording both vocals and acoustic instruments.

To make this bundle a full production solution, Steinberg partnered up with controller manufacturer, Nektar, to include the Impact LX25+ that features a 25-note velocity sensitive keyboard with full-size, piano-style keys. In addition, there are eight velocity sensitive, four-color LED illuminated pads, eight rotary pots, transport controls and more to control the software easily.

“The Steinberg Production Starter Kit is the go-to music production bundle for aspiring producers. There’s really a lot that this bundle has to offer: there’s the comprehensive software set for computers and mobile, and then there’s the hardware including one of our latest audio interfaces, headphones, mic and Nektar’s Impact LX25+ controller. All the gear’s compact and portable, so you can easily put it into a backpack and be creative wherever you want.”

The Steinberg Production Starter Kit is available for a suggested retail price of 599 EUR, including German VAT.