Steinberg has announced The Guitar Recording Kit, a complete music recording solution tailored to the needs of guitar player, now available in selected countries around the world.

In cooperation with Line 6, this hardware and software bundle consists of the UR22C USB audio interface, the Line 6 Helix Native guitar plug-in, the latest version of the Cubase Artist music production system, the Cubasis LE sequencer app plus guitar cable and picks. 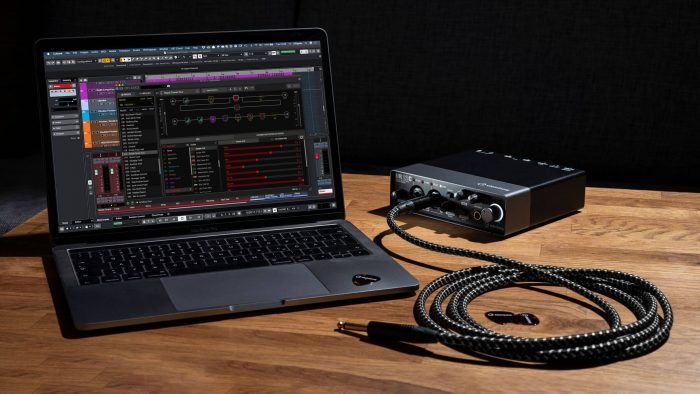 The UR22C houses two TRS/XLR combo inputs, two TRS outputs, MIDI I/O plus one separate headphone output. The two D-PRE mic preamps provide phantom power for condenser microphones. Other highlights are latency-free hardware monitoring, a sampling rate of up to 192 kHz at a 32-bit resolution. With its high-impedance input, electric guitars connect directly to the UR22C to feed into the Helix Native guitar plug-in.

Cubase Artist is based on the same technologies offered within Steinberg’s award-winning advanced music production system, Cubase Pro. Cubase Artist includes virtual instruments plus an array of audio and MIDI tools for recording and production. Cubasis LE is a multi-touch sequencer app for recording, editing and mixing on iOS handheld devices.

“Together with Line 6, we’ve been able to deliver something very special: The Guitar Recording Kit combines first-class components bespoke to the needs of guitar players, allowing them to record their music at home.”

The Guitar Recording Kit is available from resellers in selected countries for a limited time. Time of availability will vary according to the region. The suggested retail price is 449 EUR, including German VAT.