Steinberg has released the UR22 Production Studio, a limited edition package that consists of the compact UR22 audio interface, the latest version of Cubase Elements and WabeLab LE alongside the sE Electronics Magneto studio microphone, Isolation Pack and microphone cable. 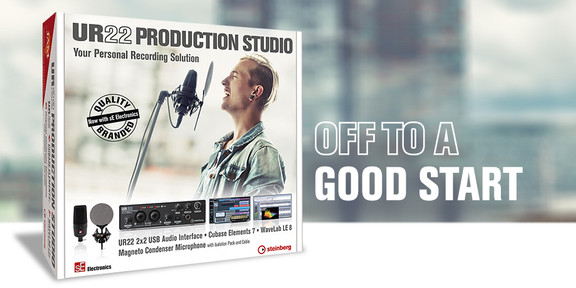 With two TRS/XLR combo inputs, two TRS outputs, MIDI I/O plus one separate headphone output, the included UR22 interface provides sufficient connectivity for mobile recording and personal home studios. It holds two of the highly acclaimed D-PRE mic preamps, offers latency-free hardware monitoring and a sampling rate of up to 192 kHz. The software bundle boasts the Cubase Elements music production system that includes the HALion Sonic SE, Prologue and Groove Agent ONE instruments plus a suite of 44 effect processors. The WaveLab LE audio editor provides all the basic tools to master any recording to the best audio quality. The sE Electronics Magneto condenser microphone produces outstanding results for recording vocals and acoustic instruments alike, while the Isolation Pack consists of a shock mount and an integrated pop shield.

Product marketing manager Stefan Schreiber commented: “We’re really happy that the co-operation with sE Electronics has come to fruition. Their Magneto mic is the perfect complement to the UR22 interface, and together with the included versions of Cubase and WaveLab, the UR22 Production Studio has everything a demanding neophyte will be needing to record, mix and edit vocals and instruments.”

The UR22 Production Studio is available for purchase for 299 EUR including German VAT.