Steinberg has announced the release of Cubase Pro 8.5 and Cubase Artist 8.5, bringing new tools and many improvements to the software for mixing, arranging, recording and composing. 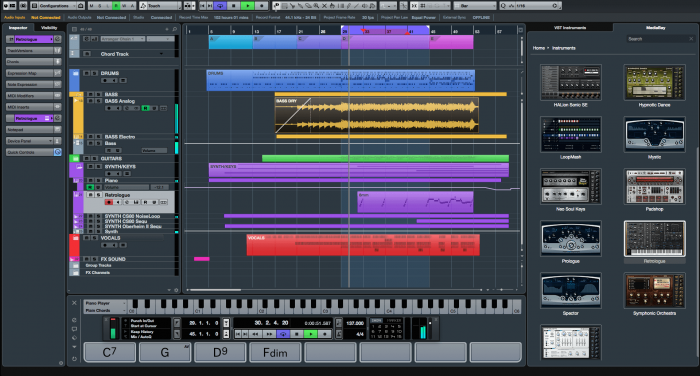 Retrologue 2 is the second iteration of Steinberg’s virtual analog synthesizer that includes enhancements to the synth section, many new presets, the highly flexible Arpeggiator and five new effects, such as the innovative three-band Resonator.

Other highlights show refinements to the MixConsole, now with an improved dynamic hover mode and the option to show all inserts, sends and EQs simultaneously. Importing tracks from other projects is now a lot easier and now includes all track settings and content. The Key and Drum Editors come with new visualization and editing capabilities; the Chord Pads feature allows for intuitive control of arpeggiated and overlapping chords plus support of custom chord symbols. The Transport Panel has been overhauled while its menu item contains all commands and options clearly categorized in submenus. Dedicated punch points have newly been introduced, which remain independent from the locator position. Audiowarp now boasts improved audio quality when time-stretching due to the élastique v3 algorithm by zPlane, and the new MediaBay project rack expedites the location of instruments, presets and audio and MIDI files. The new Profile Manager is exclusive to Cubase Pro 8.5, allowing uses to store and recall program settings and preferences. Customized profiles can then be transferred to any studio environment running Cubase.

“The 8.5 updates are the next step in the ‘Provolution’ that started a year ago with the previous Pro and Artist 8 versions,” said Steinberg’s Director of Marketing, Frank Simmerlein. “We listened very closely to what our customers were saying, and our team responded in detail by delivering an equal balance between strong new features and a multitude of refinements to the brick and mortar of Cubase.”

Customers who have activated Cubase Pro 8 and Cubase Artist 8 since October 15, 2015, are eligible for a free, downloadable Grace Period update to the latest version.