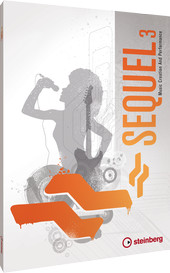 Steinberg has announced the release of Sequel 3, a major update to the music creation and performance software, with studio-quality audio effects, virtual instruments plus a wide-ranging library of patterns and sound presets.

Designed to meet the needs of entry-level computer music enthusiasts, Sequel 3 is an easy-to-use music software application for recording, editing and mixing. Its instruments and effects, plus the included arranging and performance features, turn Windows and Mac computers into streamlined production studios that cater ideally to the user’s degree of sophistication.

For anyone interested in getting to know the ropes of computer music production, Sequel 3 is the ideal tool to start out on this endeavor. Providing versatility through its feature set and high-quality content as well as intuitiveness owing to its one-window design make Sequel 3 the all-in-one solution for songwriters, composers and producers of different music styles.