Steinberg has released version 7.0.6 of the Elements, AI and LE editions of its Cubase digital audio workstation software.

The update focuses on visibility and workflow enhancements for MixConsole, including the ability to display channel names in two rows as well as one-click plug-in access. 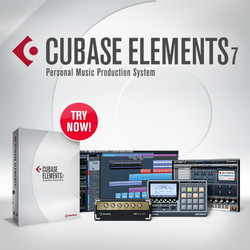 Steinberg has also announced the release of a trial version of Cubase Elements, the smallest retail version of its Cubase music production software.

Functionally identical with the retail version, the trial version will run for 30 days, so there’s plenty of time to record audio, try out the powerful recording, editing and mixing tools as well as the included instruments and effect plug-ins.

Try the new MixConsole with its integrated EQ/Dynamics channel strip modules, the Chord Track for easy chord management or the VST Amp Rack guitar tone suite and experience the highly intuitive Cubase workflow relished by professionals around the globe.

No registration is required. Just download, install and enter the world of Cubase.