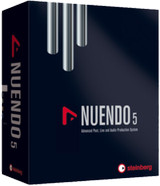 Steinberg has released version 5.1 of Nuendo, the post, live and audio production solution for Windows and Mac.

The Nuendo 5.1 update adds MXF Audio support, as well as several stability and performance improvements, focusing on the AAF import/export, the editing functions, the video engine and the MediaBay.

The support of MXF Audio further extends Nuendo’s compatibility to industry standards, making the exchange of audio data much faster than before. With MXF, post-production studios and broadcast stations around the globe can share projects easily and without compatibility issues. In addition to this powerful new function, Nuendo’s MediaBay has been reworked and now sports faster search capabilities and enhanced preferences.