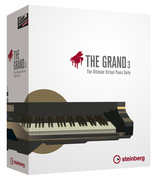 Steinberg has released version 3.1 of The Grand 3, a virtual piano suite for Windows and Mac.

Today, Steinberg releases a new update for the world’s most authentic virtual piano suite, The Grand 3. The brand-new 3.1 version adds 64-bit support for Mac platforms, as well as several workflow and performance improvements.

Changes in The Grand 3.1