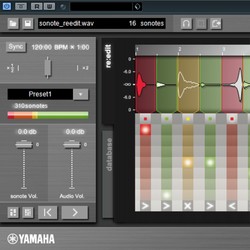 Based on Yamaha’s innovative sonote technology, sonote beat re:edit lets you create remixes of your beats in next to no time. Extracting characteristic beat slices from an audio loop and swapping them with similar sounds from other audio files, sonote beat re:edit helps you to change the character of your grooves in the most creative and fun way.

Sonote beat re:edit for Cubase 7 is available to purchase for 49.99 EUR inc. VAT.