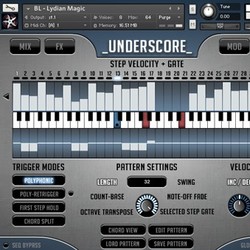 StudioWeapon has announced the release of Underscore, a virtual instrument library for Native Instruments Kontakt.

Underscore is an instrument library for Native Instruments Kontakt 5.1. It is designed to meet the needs of modern working composers, who are often asked to write and deliver a LOT of music in a short amount of time.

It includes a wide array of acoustic-hybrid and electronic sounds, which can be played as instruments from your keyboard, or driven directly from the key-triggered FluidPhrase Engine. In concert with the Phrase Envelopes, 5-layered voice architecture, filter modulation and FX, Underscore is a juggernaut of rhythmic scoring.