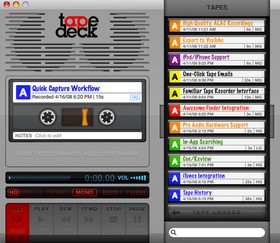 SuperMegaUltraGroovy has announced the release of TapeDeck 1.5, the long-awaited sequel to the powerful and fun audio recorder for Mac OS X.

This new release adds support for high-resolution Retina displays, and improved YouTube uploading with high definition output. Just in time for the holidays, you can purchase TapeDeck 1.5 for only $4.99 US (regular MSRP $19.99 US) for a limited time at tapedeckapp.com.

“When TapeDeck first launched in 2008, we worked hard to make an application that took full advantage of Core Animation to deliver a delightful user experience,” said Chris Liscio, SuperMegaUltraGroovy’s founder. “Now with the new Retina displays, we can continue delivering that experience at an even higher fidelity.”

As its predecessor, TapeDeck 1.5 features the cool retro interface reminiscent of an 80’s tape recorder. It offers a quick-capture workflow, allowing you to automatically save your recording as soon as you hit STOP. Using the Apple Lossless Audio Codec, TapeDeck captures its High Quality recordings with full fidelity, ensuring that your musical ideas are kept intact when moved to Garage Band or Logic.

“TapeDeck is such a popular application with songwriters, physicians, students, musicians, teachers,” says Liscio. “The user base is very diverse,and always growing. This release embraces Apple’s newest OS technologies in order to continue delivering its delightful and unique experience to a growing pool of diverse Mac users.” TapeDeck 1.5 requires a Mac running OS X 10.8 Mountain Lion, and also adds support for Apple’s Sandboxing security feature while also adopting other new technologies under the hood. In addition, this update includes many performance and stability improvements.