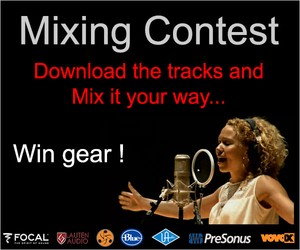 Sweetwater has announced the GearFest Mixing Contest, its largest audio mixing contest in collaboration with pureMix, offering participants the chance to win over $18 000 worth of high end audio equipment.

Sweetwater and pureMix.net are proud to announce that they have partnered together to organise the most exciting mixing contest ever seen on the web. Participants can register for FREE and download the raw tracks from famous artist Liza Colby and do their own mix. The winners will win amazing prizes donated by Dangerous Music, Focal Professional, Universal Audio, Blue Microphones, Presonus, Lauten Audio, Vovox and Sweetwater. That’s pretty cool, isn’t it ?

Tracked live on stage in front of a rapt audience at Sweetwater’s GearFest 2012, “Oh Baby” is a raw gem that will let contestants really prove their mixing skills. The contest is completely platform independent : any DAW, any platform is welcome. The pureMix team and Fab Dupont will pick out the 16 winners for the 16 prizes. Judges will focus on mixing skills and “taste” to pick the winners, not what equipment was used.

Contest instructions are available at pureMix after a FREE registration. Contestants can also watch grammy nominated producer/Engineer Fab Dupont in a free video showing how the hit was recorded, with a detailed step-by-step explanation.

The mixing challenge runs until June 1st, 2013. Winners will be announced at Sweetwater’s GearFest 2013 on June 21st, contacted via email and announced on pureMix.net homepage.