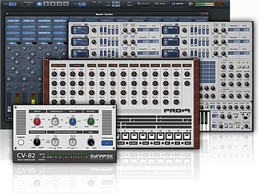 Synapse Audio has announced the releae of Orion 8.5 Public Beta 2, an update to the music production software for Windows.

Orion is a complete virtual studio software, including a powerful pattern-based sequencer, many synthesizers and effects, a mixing desk with sub busses, and multitrack audio recording.

Orion for Windows is available to purchase for $249 USD. The public beta is available to registered Orion 8 users in the service section. This will be the last beta before the final release of Orion 8.5 scheduled for September 2011.