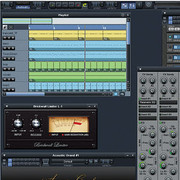 Synapse Audio has released version 8.5 public beta of Orion, a complete virtual studio with a powerful sequencer, synthesizers, effects and a mixing desk.

Orion 8.5 is now available as a public beta version in the service section for registered users. This version is a major update, adding several new high-quality effects, an improved workflow and a great new default skin designed by Nick Moritz. Many issues users reported with the previous version 8.02 have been addressed as well.