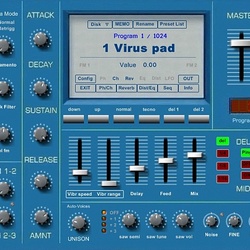 Synthblitz has released version 1.8 of the Nitroflex synthesizer instrument for Windows.

Nitroflex is a powerful, feature packed virtual synthesizer that is well suited for professional music producers, enabling them to create unique waveforms.

The new version introduces 2 new LFOs, 300 new presets for a total of 1024, and other new features.

Nitroflex is available to purchase for 49 EUR.