Syntheway has announced the release of the Vox Quantizer 4-voice stereo chorus effect for Windows and macOS. 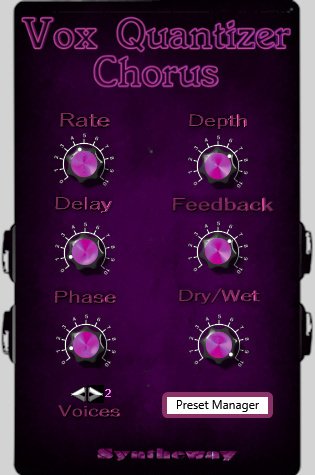 The plugin features controls for pitch modulation, delay time and feedback, phase adjustment, voices, and more. It comes with 24 presets including a vocal doubler and voice multiplier options.

Vox Quantizer is a stereo Chorus effect that simulates several voices or instruments played at once by adding multiple short delays with a slight amount of feedback, making each voice or instrument sound distinct from the original. The effect varying between the left and right channels by offsetting the phase modulated by sinusoidal low-frequency oscillations.

A highly tweakable, versatile and inspiring solution to produce from a clear, widener and subtle chorus to a fluid, underwater pulsating warble, or a rotating speaker effect. Turns any mono source into a stereo with a slight warm chorus, varying to an extreme chorusing effect, suitable for guitar, vocals, bass and keyboards. Available as plugin in VST and VST3 64 bit versions for Windows as well as in Audio Unit for macOS.