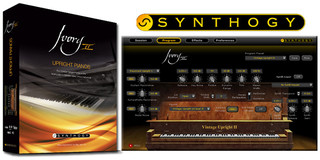 Time+Space has announce that Ivory II Upright Pianos by Synthogy is now shipping within the UK.

With each of the four Upright Pianos boasting more velocity layers, pedal noise enhancements, half-pedaling, and more, Ivory II Uprights offers a more intimate and authentic playing and listening experience than ever before.

Any user who registered the previous version of Upright Pianos after 1st November 2009 may be eligible for a free upgrade. Simply call Time+Space on 01837 55200 with details of your existing serial number so they can confirm eligibility.