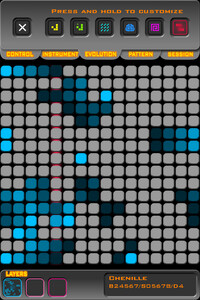 Team Popo has released BeatEvolve, a generative music app in which the grid of notes can ‘evolve’ according to rules such as Conway’s Game of Life.

Anyone can make music with BeatEvolve! With 31 instruments to choose from, the intuitive interface lets you combine 3 layers of harmonies to create awesome riffs!

Select from one of six preset evolution rules or create your own from scratch then sit back and watch as the music changes all by itself.

The app is available to purchase from the iTunes App Store, a free version is also available.