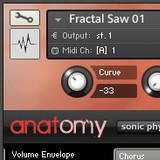 TeamDNR Collaborative Designs has announced the release of Anatomy01, the first in its new Sonic Physiology sound library series.

The goal behind Anatomy, and all other libraries in the sonic physiology series, is to provide a palette of fundamental sound templates and raw waveforms in a manner that would most increase productivity and streamline your workflow.

Anatomy01 comes included with a standalone package of single-cycle fractal and sine-based hybrid waveforms, with 53 base waveforms and a minimum of 6 octaves (1 cycle per octave) containing 365 individual wave cycles, as well as a package of 82 Kontakt template instruments and 20 Kontakt multi-instruments.

The standalone waveforms are categorized by waveform base shape (ie.. Sine-Based) and each waveform has either 6 or 7 samples (one per octave – C0, C1, C2, etc..). The reason for multisampling these waveforms is so that users who are utilizing software without the necessary anti-aliasing abilities required to shift a single-cycle across an entire keyboard range can also achieve high-quality results by selecting a sample with the proper root key. Each sample in the library is named with all pertinent information in the filename, such as sub-selection number, waveform type and root key.

Each group of waveform multisamples has been built into a complete package of template sounds and starter instruments, which will allow you to quickly find raw sounds by timbre and edit them quickly to fit your compositions. Each Kontakt instrument also has a custom front panel design with access to both the AHDSR and envelope curve control as well as control over the FX chain which is implemented in each instrument.

Anatomy01 is now available for $5 USD. Until November 25th, a pre-order will be available for those who wish to purchase the entire 3 volume set at a further discount.