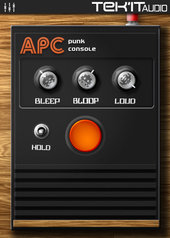 Also known as “Stepped Tone Generator”, published in 1980 by Forrest M. Mims III, the circuit consist of a frequency oscillator that drive a monostable which emits square output pulses. The circuit has become very popular in the DIY electronic music scene and now you can experiment it directly in your DAW.

“APC” comes with modifications of the original circuit, the tone push buttons that change the tone by +/- 1 octave, a resonant highpass filter that self oscillate and a gate controller with a hold function.

Users can submit new ideas online to mod APC, based on modifications existing in the DIY scene, or their imagination.