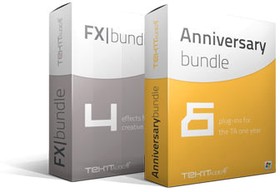 Tek’it Audio has announced the a limited time offer on its FX and Anniversary plug-in bundles, which are 50% off through October, 2012.

The Anniversary Bundle is a special bundle released for the 1 year of Tek’it Audio and contain the six plug-ins published at this time. Badass a distortion and filter effect, Kutter 2 a sequenced frequency cutter, 8eqf a semi-parametric equalizer, 8eqp a fully parametric equalizer, APC a virtual atari punk console synth and Genobazz R a monophonic synthesizer.

Tek’it Audio will continue its celebration this month by launching more offers, contests and a giveaway.