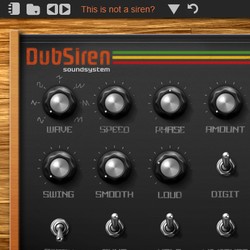 Tek’it Audio has released version 1.6 of its DubSiren synthesizer plug-in for Windows.

DubSiren recreates the siren sounds made famous by Dub and Reggae Jamaican sound system. This update comes with some optimizations, improvements and 16 new preset made by ONES & ZEROS a Psychedelic Dub producer.

DubSiren is available to purchase as a VST instrument plug-in for Windows for 20 EUR/$26 USD.