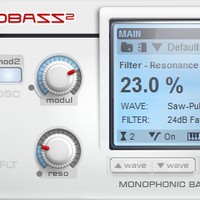 Tek’it Audio has announced version 2.2 of its Genobazz free bass synthesizer plug-in and the releases of a free expansion.

This new update of Genobazz has some bugs fixed, a new band pass filter, some minor improvements on the GUI and each envelopes (MSEG) can now have negative values to create even more complex modulations. This update come with 2 new presets demonstrating the improved MSEG.