The Interruptor has announced the release of Night Flight, a virtual analogue string ensemble synthesizer instrument for Windows. 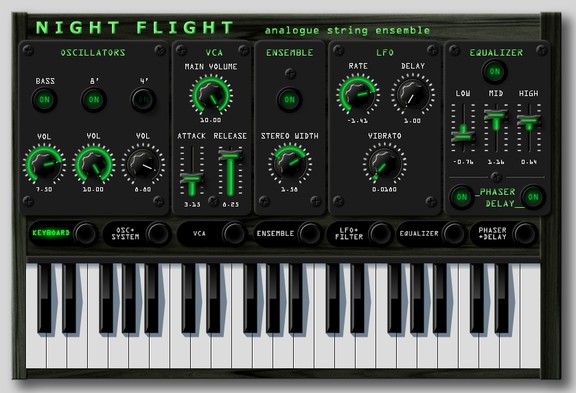 String machines have been widely used in Pop, Rock, Funk, Reggae, Soul, and Disco music throughout the seventies and up to the early eighties when they were popular with New Wave acts. In recent years the sound has stirred interest again due to it’s distinct character and undeniable vintage charm.

“Night Flight” does not use any samples. It is based on an emulation of the ensemble effect first used by Eminent / Solina back in 1972 and an organ-like sound generation (octave divider). You will also find a number of features inspired by other string machines like the 3 band equalizer from the Crumar Performer or the Envelope Filter on the very rare ARP String Synthesizer.

Night Flight for Windows (VST) is available to purchase for the introductory price of $9 USD until April 15th, 2013.