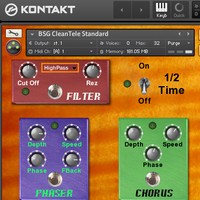 The Sound Department – Austin has announced the release of Beat-Sliced Guitars, its first sample based instrument for Kontakt.

This is an innovative, dynamic, beat oriented guitar instrument set unlike any other.

It’s simple really – guitar played rhythmically in all the common note length variations and two playing styles, sampled and sliced so that it stays solidly in time with your host. Add some Kontakt magic like filters, delays and envelope loop patterns and voila – an incredibly expressive, inspirational and downright fun to play instrument! Multis extend the possibilities by adding a second or third instance with different keyswitch mappings so that more interesting and complex rhythmic patterns arise as different keyswitched note values are played against each other.

If you’re looking for an instrument that will let your guitar-slinger solos sound as close to a “real” guitar as possible (or as close as midi will allow), look elsewhere. What these instruments will do is provide a fresh and organic rhythmic timbre that is at once unique and familiar. No matter what your style, these instruments will give your compositions a solid edge.

Beat-Sliced Guitar libraries are available for the introductory price of $12 USD each (regular $18 USD).