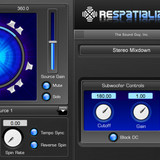 The Sound Guy has released version 1.1.2 of ReSpatializer, an advanced panning, surround sound and spatialization effect for Mac and Windows.

ReSpatializer is an advanced panning, surround sound and spatialization plugin for Windows and OS X Universal. It supports up to eight input channels, each of which can be individually panned.

The panning is presented in an easy-to-follow heads-up display with access to positioning, channel gain, mute/solo selection, and spreading. Other special processing includes variable-rate source rotation that can synchronize to the host tempo, low-frequency effect (LFE) tools for monitoring or bouncing to disk, and a large variety of output speaker formats (up to eight channels, DTS, Dolby, ITU, Film and others).

ReSpatializer also offers simulated surround sound through headphones. After mixing your tracks for various surround formats, you can create a binaural headphone mix. This simulation is achieved by utilizing precise measurements of the pinnae, head, and torso to realistically localize a sound source through two channels. ReSpatializer can also create a stereo speaker mix.

ReSpatializer v1.1.2 fixes a click when using the Spin function in 4-channel mode.