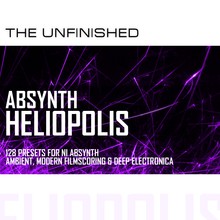 The Unfinished has announced Absynth Heliopolis, a collection of 128 evocative sounds aimed at ambient music, but also perfect for modern film scoring and deep electronica.

“Matt is a master at creating brilliant new sounds. Heliopolis is no exception. It’s one of those banks I wish he wouldn’t sell to anybody else!”
– Sascha Dikiciyan, aka Sonic Mayhem, Composer/Producer (Mass Effect 3, Borderlands 2, Tron: Evolution, Quake Series)

The collection is full of dark and beautiful pads, soaring and twisting soundscapes, subtle and shifting leads and keys, plus gentle and disturbing synth sequences and basslines.

So, if you’re looking for huge but subtle ambiences, beautiful but disturbed synth noises, then Absynth Heliopolis is the soundset for you.

The soundset is avaialble to purchase for £14.99 GBP. A demo pack of 20 sounds can be downloaded at no cost. Heliopolis requires Absynth 5 (some sounds will not work in Absynth 4) and uses the .nabs format.