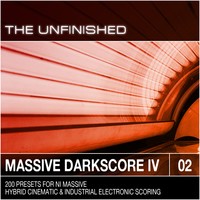 The Unfinished has announced the release of Massive Darkscore IV, the latest release in the Darkscore series, which aims to provide cutting edge digital electronic sounds for hybrid film scoring and atmospheric electronica.

If you are looking to add some deep, dark, driving electronics and atmospherics to your music, this collection provides you with a huge range of sonic possibilities. At its core it is targeted at the darker side of electronic film scoring, but is also flexible enough to be used in atmospheric electronic genres such as dubstep, ambient and industrial. The collection has been influenced by recent film scores, such as Total Recall and Judge Dredd, as well as the twisted electronic tones of Trent Reznor and Atticus Ross.

Each patch comes with flexible control via the eight macro knobs, allowing you to quickly control the tone and dynamics of the sounds and providing access to hundreds of new variations.