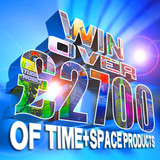 Time+Space has announced a brand new competition for the festive season with a giant first prize bundle worth over £2,700.

To celebrate a successful 2009, which has seen the release of some huge titles including Rob Papen’s SubBoomBass, Sample Logic’s Morphestra, and of course Spectrasonics’ Trilian, to name just a very few, the generous people from many of Time+Space’s brands have each made a donation to the bundle resulting in a plethora of music-making magnificence!

There’s also two runner-up prizes of sample library bundles worth over £350 each!