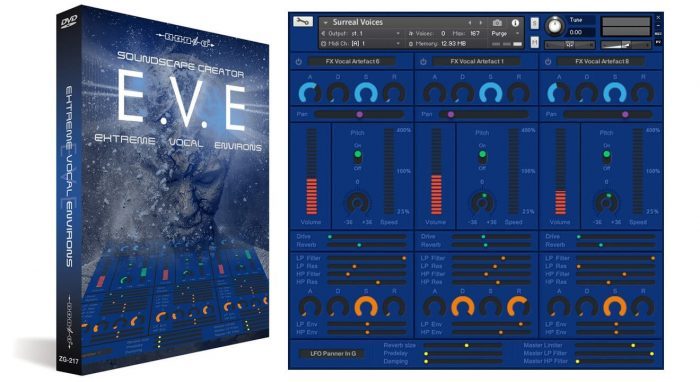 This unique sound design tool allows you to quickly and easily create dense and complex ambiences using a huge variety of vocal sources. From musical pads and textures rich in detail and emotion through to extreme sound design, Extreme Vocal Environments gives you almost limitless capabilities.

Explaining his use of vocals as the sound sources, Si Begg said, “I feel that, even when heavily processed, the human voice has an inherent “soul” that somehow affects your brain in a way other sounds don’t. So you can get a lot of emotion and humanity out of a single held note that a synth or other instrument doesn’t give you. Also the detail and imperfections in the human voice instantly make things interesting sonically, so its a great universe of sounds to work with.”

Delivered as a highly flexible Kontakt Instrument with over 150 presets for creating a huge variety of beds, drones, pads and FX, Extreme Vocal Environments also includes audio loops as AIFF Apple Loops and Acid Wav files to use as building blocks for your own beds and drones.

Impulse responses are also presented which can be loaded into any number of commercially available convolution reverbs to make a large library of extreme reverbs.

FXpansion launches sale on Geist – 60% off