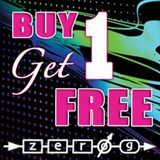 Time+Space has announced a Buy One Get One Free offer on various Zero-G products.

Zero-G can, without doubt, be classed as one of today’s sample library legends having pioneered the industry for twenty years. With classic libraries such as Jungle Warfare, Planet of the Breaks, Morphology and Voices of Africa still selling today, it’s no wonder Zero-G is one of the most critically acclaimed sound developer brands in the world.

Thanks to the likes of Distorted Dancefloors, Progressive House, Dark Skies: Cinematic Ambiences and Disco Gold, to name but a few, Zero-G has enjoyed a resurgence in the last year or so, bringing the brand to whole new generation of music producers, from professionals right through to bedroom hobbyists. In fact, Distorted Dancefloors received full marks all round from the music production press and Dark Skies sold out within two months of release!

Simply purchase your chosen title as normal through Time+Space or a participating dealer and then send proof of purchase with the rebate form (downloadable from timespace.com) to Time+Space. They’ll then send your chosen free second title to you directly with no extra charge.