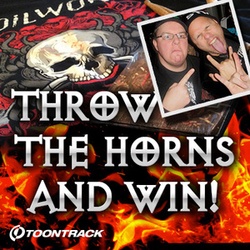 Toontrack Metal Month 2013 is well underway and European distributor Time+Space are cranking up the action to epic proportions with a colossal bundle of prizes.

In addition to over £700 worth of fine Toontrack software, the Grand Prize winner will win exclusive signed Soilwork swag including official t-shirt, The Panic Broadcast album PLUS Dirk Verbeuren’s very own devastated drumsticks.

To enter, all you need to do is submit a photo of yourself ‘throwing the horns’ by the 21st November. Public voting will take place between 22-28th November to determine the four lucky winners.