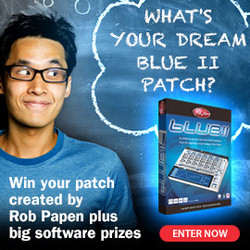 As the release of Rob Papen’s Blue II crossfusion virtual synth is almost upon us, we’re giving you the chance to have your dream patch created by the man himself!

Simply describe your ideal patch using as much detail as possible. Once the closing date of 3rd March has passed, three winners will be randomly selected and Rob Papen will design the three patches within Blue II. The patches will then be made publicly available for all Blue II users!