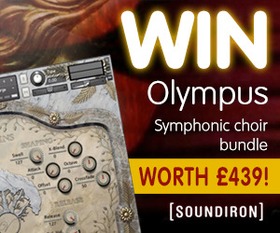 Time+Space has announced a sweepstakes, offering a chance to win the Olympus Symphonic Choir Collection sample library by Soundiron.

Their most recent triumphs are the Symphonic Choir Libraries – Mars and Venus – which, in a recent interview with Time+Space, Soundiron co-founder Mike Peaslee rated among his most proudest achievements to date…

“Together in terms of size and scale, they´re larger than all of our previous choral projects combined. We covered greatly expanded Latin content, all new Russian material, a ridiculous number of staccato and marcato articulations, tempo-synching, more robust word building and phrase sequencing, larger soloists sections and so much more.” – Mike Peaslee

Throughout August, Soundiron’s UK distributor Time+Space is giving you the chance to win a copy of Olympus Symphonic Choir Collection – an epic bundle containing the awe inspiring Mars and Venus men’s and women’s choirs.