Togu Audio Line has announced the TAL-U-NO-LX, a new Juno-60 emulation with a fully rewritten new engine and GUI. 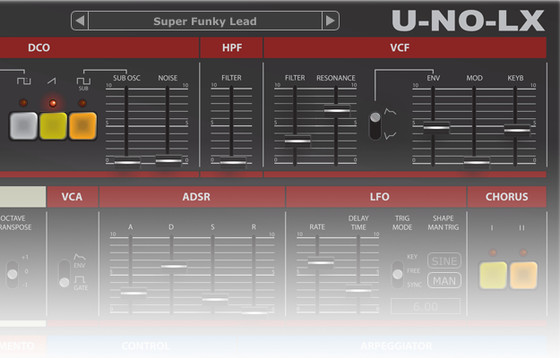 Up to date zero feedback delay filters and carefully calibrated controls make this synth a good replacement for the analog device with all the advantages software plugins have. It’s even possible to recreate old Juno patches from an existing patch sheet. As an addition, the TAL_U-NO-LX also supports portamento and different LFO waveforms and some more useful features. An arpeggiator with different sync modes and hold function is also included.

This new version will also be available as 64bit OSX AU and VST plugin. It was hard to calibrate a synth that has different envelope times on every voice, but we even copied this to some degree :)

TAL-U-NO-LX will be available to purchase within a few weeks. People who donated $17 USD or more (up to June 11th, 2012) will get a free license.