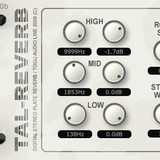 Togu Audio Line has released version 0.95b of TAL-Reverb, a free reverb effect plug-in for Windows and Mac.

TAL-Reverb-II is a free stereo plate reverb. TAL-Reverb II is an improved version of the successfully TAL-Reverb I. Improvements in usablity and sound were made. Added a simple subtractive EQ section and a stereo input mode. Each control has its own label that shows the actual value.

TAL-Reverb is available to download as a freeware effect plug-in for Windows and Mac (VST/AU).