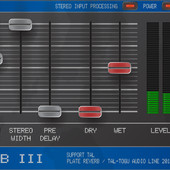 Togu Audio Line has announced the release of TAL-Reverb-III, a free reverb effect plug-in for Windows and Mac.

TAL-Reverb-III is an easy to use stereo plate plugin. Its the replacement for TAL-Reverb-II and has several improvements as an optimized GUI and some changes in the algorithm. It has a simpified EQ section, a meter display and shows actual slider values.

The reverb has its own character and produces a very diffuse plate. I tried to create a colorless and maximal diffuse plate reverb without grains and digital artefacts. Its the result of a lot tuning and testing.

TAL-Reverb-III is available as a free download for PC and Mac (VST/AU).