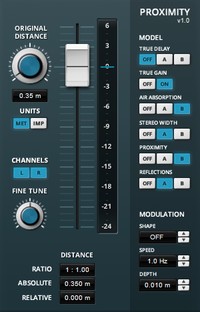 Tokyo Dawn Labs and vladg/sound have collaborated to release the Proximity effect plug-in for Windows and Mac, as part of the KVR Developer Challenge 2012.

This plug-in is an easy to use distance “pan-pot” based on several psycho-acoustic models. The idea is to give mixing engineer a reliable tool which allows him to manipulate the “depth” of several sound sources in a straight forward and convincing manner.

Several models can be combined:

All of them can be turned on and off to taste. Distance modulation options extend the creative possibilities even further. Units can be switched from metric (meters) to imperial (inches).

Proximity is available in 32 and 64-bits versions for Windows and Mac (VST/AU).

This is a dedicated vocal de-esser designed for precise and unobtrusive reduction of offending sibilance.

The concept is based on accurate band extraction via linear phase filters (either bell or shelf shaped) and a highly specialized, level-independent sibilance detection algorithm.