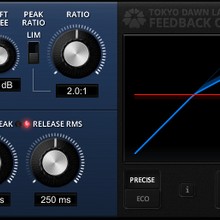 The TDR Feedback Compressor II is a radical revamp of its critically acclaimed predecessor. The processor elegantly combines the self-adjusting properties of feed-back compression with an advanced, yet musically intuitive control scheme.

The new beta is available to download for Windows (VST). With the move to the JUCE framework, Mac VST and AU is expected in the near future.