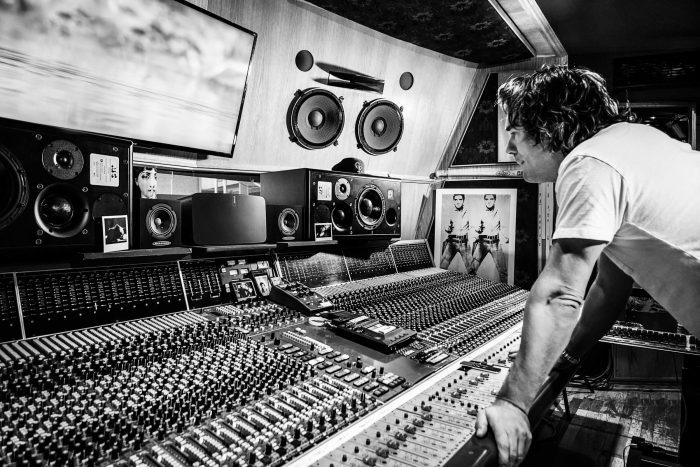 “Tom Elmhirst is a mix engineer based at Electric Lady Studios in NYC.” So reads the somewhat humble homepage for the talented individual in question. Yet the British-born specialist music producer and mix engineer’s many achievements at the helm of a large-scale console — currently a Neve VR-72, about which he is on record as stating, “It’s a luxury… I can do ten things at once, but with a mouse I can only do one…” — speak louder than words. While most of the many millions of listeners who have heard the results of his sterling work with several of the biggest-selling recording artists around today will not know a Neve from an SSL, the man with the Midas mixing touch clearly knows what he is doing and must be doing something right with that mission-critical mixing and ATC monitoring setup aiding his course of action time and again.

As of June 2016, British singer/songwriter Adele’s third studio album, 25 — mostly mixed by Tom Elmhirst, has sold some 20 million copies, having become the world’s best-selling album of 2015. He has also manned the faders for Adele’s critically-acclaimed and commercially-successful debut long-player 19 in 2008 and its 2011-released multiple GRAMMY award-winning followup, 21, the longest-running number one album by a female solo artist in the history of the UK and US album charts. Credits in-between and beyond include Irish stadium rockers U2’s thirteenth studio album Songs Of Innocence (2014) — famed for being announced at an Apple launch event and released on that same day to all 500-million iTunes Store customers at no cost — and 2016’s Blackstar, the twenty-fifth and final studio album by British singer/songwriter David Bowie — the innovative and iconic artist’s first and only album to top the Billboard chart in the US in the wake of his death, to name but a notable few.

But between those noted successes, Tom Elmhirst successfully transplanted himself and his sought-after services to Electric Lady Studios, the oldest working and thriving recording studio in New York City, founded back in 1970 by American guitar hero Jimi Hendrix. “I moved here about four years ago for both life and work reasons,” he reasons. “I wanted a change, having mixed in the same room in London for nearly 10 years. You can’t beat being part of an iconic studio based in the heart of Greenwich Village, so when Lee Foster — manager at Electric Lady Studios — showed me the only vacant room I jumped at the chance to set up home there!”

The tremendous workload of the time dictated that Tom Elmhirst had to hit the hallowed ground running, so speedily furnished his new ‘home’ with the aforesaid Neve VR-72 console while monitoring came courtesy of ATC, a new and enjoyable experience for the mix engineer extraordinaire: “I’d used monitors from another manufacturer for years, but they stopped making the drivers, so it became increasingly difficult to replace one if it blew. A friend of mine lent me a pair of SCM25A Pros for a few days when I first moved to New York and I enjoyed the experience so much I went ahead and got myself a pair of SCM50ASL Pros. The sub and the speakers are tuned to the room using an XTA DP44 DSP-based audio processor, so everything is balanced as a three-way system rather than just adding low end.
Having the sub allows the woofers on the SCM50ASL Pros to work more efficiently as well. In the years that I’ve owned this system, I’ve found the ATCs to be invaluable and the majority of artists that I work for also enjoy the listening experience.”

‘A-list’ artists like Adele. “I was mixing ‘Skyfall’ right around the time that I got my ATCs,” adds Tom Elmhirst. “The accuracy of the SCM50ASL Pros proved invaluable for mixing such a complex song with so much orchestration.”

Obviously Tom Elmhirst knows what he likes and likes what he hears — so much so that he has augmented his ATC setup still further: “The addition of SCM45A Pros perfectly supplement my second rig to bring it in line with my main control room monitoring setup. It’s important that both rigs can speak the same language so I can work and my assistants can work in both places comfortably and confidently.”

Chances are we won’t have to wait long to hear another chart-topping mix making its musical way out of Electric Lady’s Studio C. But by then Tom Elmhirst and his assistants will likely be enjoying the experience of working with those ATC professional loudspeakers on another one!