Tone2 Audiosoftware has announced the release of RayBlaster, a software synthesizer for Windows and Mac. 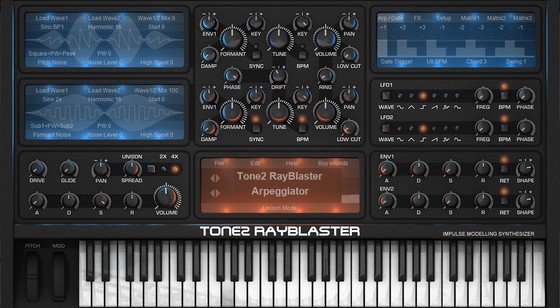 Rayblaster employs a new synthesis technique called Impulse Modelling Synthesis (IMS) which represents a radically different approach to synthetic sound generation. Based on the latest research in psychoacoustics, Tone2 RayBlaster unveils a completely new & unique world of sounds and sound creation that is exclusive to Rayblaster and not possible with other synthesizers.

What is Impulse Modeling Synthesis?

Offering a new world of high quality sounds and limitless creative potential for all styles of music, IMS goes well beyond traditional forms of synthesis. Conventional synthesizers employ what is known as subtractive synthesis, in which the oscillator source is a looped waveform that is filtered to create a sound. By contrast, RayBlaster utilizes an entirely new and fresh approach to sound generation and creates its distinctive sound from many short bursts of energy, which combine to form a more complex sound. In fact, this innovative approach to synthesis is very close to what happens within the human inner ear.

Whether you’re a professional producer, synthesizer enthusiast, or a live performing musician, distinctive and high quality sounds are just a key press away with RayBlaster’s revolutionary IMS synthesis engine, its psychoacoustic processing, and its carefully designed signal processing.