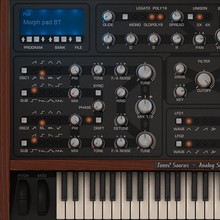 Tone2 has announced the release of Top of the Clubs, a soundset for the Saurus software synthesizer for Windows and Mac.

“Raise your hands, Feel the energy, Feel the rush, are you ready to go crazy?”, words often spoken by MC’s all over the world during the sets of some of the top DJ’s.
But it’s the music that gives the crowd that adrenaline shot in the arm and the feeling of total euphoria, and no more so than in a Trance club.

Now you can get the massive sounds of Trance with the Top of the Clubs soundset for Saurus. Bringing you the best in huge leads, spaced out arps, immense bass lines and ambient pads, the Top of the Clubs set covers all the bases for creating modern trance music. It doesn’t end there, these incredible sounds lend themselves to many other genres, such as Dance, DnB, Electro and RnB to name a few.

With over 200 ready to go sounds, Top of the Clubs is a bank that shows the true power of analogue synthesis in the virtual world. You too, can make your own dance floor slammers that will ignite any party.

The soundset is available to purchase for 29 EUR.